What others would be able to know about your character. Add an OOC section for things which could be discovered through RP!
Post Reply
2 posts • Page 1 of 1

Dana is the heiress to the Starlaothi fortune, but much to the dismay of her status obsessed family, she prefers to spend her days in various Planetary Wildernesses, hunting game to supply for the plates and palates of Megan's customers.

Originally, she started life as the daughter of Dayna and Kev Starlaothi. He had changed his name when he joined the Kreiger Mercinary group, and his wife joined the mercenaries after boarding ship on Dathomir, having had a falling out with her clan. Dana was born into this lifestyle and after her parents died in a battle, she was taken in by the mercenaries and made their mascot, From mascot at age six, she rose to the rank of full lieutenant by the Battle of Endor at age 17. (She was on the ground as a scout for the Empire...and watched helplessly as the rest of her group, all station and defending the second Death Star was destroyed. Subsequently, she was left behind and was a prisoner of the Republic for a short time until she was released on Corellia. It took several months for her to collect her pay from the Empire. ) The only break in this lifestyle before Endor was a visit to visit her Naboo family, that by all accounts, was mercifully short as she tended to harbor wildlife in her rooms on the Starlaothi estates. Apparently, the final straw was when she brought a full grown Peko Peko to a ball..

She came to her fortune at age 18, recently, after the other heir, one Luna Starlaothi and Dana's aunt, scandalized Naboo society by running away with one of her shopclerks, Al Skyshooter, a maker of fireworks and a musician. Rumor also has it that he was also a bodyguard sent to spy on her by the family.

Abilities: Dana is proficient with all ranged weapons as well as with knives, thanks to her merc background. She is also gifted with a rapport with her pets that border on using the Force at times. She has also been shown to be stronger than average, but again within normal limits. (Recently, she discovered that like her mother, who was a healer on Dathomir and later with the Kreiger, she is able to tap into the Weave. She is still learning her abilities, some of which she has used on an unconscious level. She refuses to use a lightsaber, instead using a small Kyber crystal as a focus for her more specialized 'Magiks'. Of course, she tends to be picky about who she reveals her abilities to)

Clothing sense: Tends to wear casual clothing: in the field she wears armor with an overcoat tossed over it if it is temperate to cold weather. Has been known to strip off her dress uniform at one gathering so that she could swim without harming the uniform. (fortunately, she was wearing undergarments.) Has also been known to wear dresses to formal gatherings but has also been seen recently wearing native Dathomirian clothing.

How I see Dana: 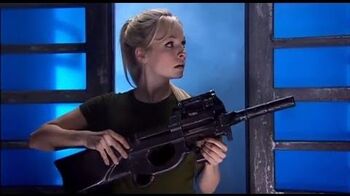 (note: First time my husband and I saw the DW episode "The Doctor's Daughter": "OMG, that's DANA!"- Hubby. I'm the one sitting there with her mouth open as Georgia Moffett made her entrance. And yes, Dana would breeze through that obstacle course in the episode....)
Top
Post Reply
2 posts • Page 1 of 1

Users browsing this forum: No registered users and 2 guests