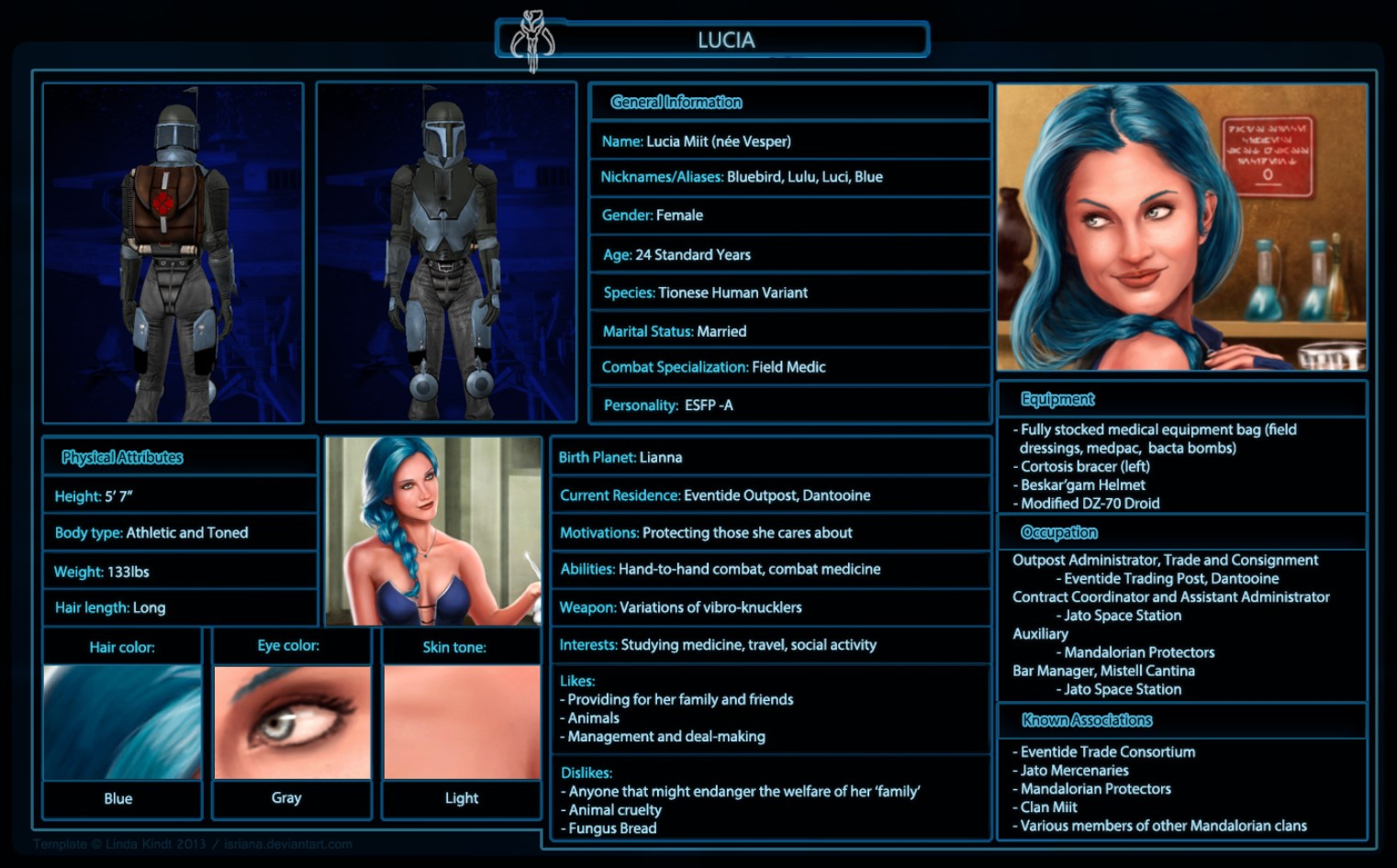 Fashion of Choice: Semi-revealing, casual wear when playing host or in private gatherings. Generally armored when out and about.
Armor of Choice: Combination of durasteel and composite armor. Beskar’gam Helmet.
Weapons of Choice: Vibro-knuckler, Blasterfist, Punch-dagger. Some proficiency in staves and rifles.

Special Abilities: A former pickpocket, Lucia can manage decent sleight-of-hand when needed. Her time spent as a bartender, waitress, and dancer at various venues in her past have helped her to pick up several languages, though she understands more than what she can speak.

Personality: ESFP-A Personality Type
Motivations: Protecting and helping those that she considers family, or anyone else in need of assistance
Disposition: Generally positive, upbeat, and friendly
Religion/Philosophy: Adherence to the Resol’nare
Sexuality: Open
Positive Personality Traits: Negative Personality Traits: Misc. Quirks: Has a strange affinity for befriending random wild animals and droids. She keeps very little in the way of personal belongings and will keep the areas she frequents meticulously clean and clear of any personally identifiable objects. While she tries to hide it, Lucia is claustrophobic and doesn’t like being in small places she can’t see the exit to. She exhibits increased nervousness in new areas if alone, and will often rub at the side of her neck when she is uneasy or uncomfortable.

Interests: Lucia is heavily invested in continuing to learn and practice the tenants of the Mandalorian culture. While capable in hand-to-hand combat, she prefers to support her team by practicing field medicine and acting as a combat medic. As a contract coordinator for a band of mercenaries and administrator for a trading community, Lucia enjoys meeting new people, brokering deals, and helping others find opportunities.

Likes:
1: Providing her for family and friends
2: Management and deal-making
3: Animals

Dislikes:
1: Animal cruelty
2: Fungus Bread
3: Anyone that might endanger the welfare of her ‘family’ through deliberate action, or negligence